If you are interested in architecture or simply want to wander around to get a feel for Cricklade then you might want to visit some of the following buildings/landmarks around the Town. This map might help you find some of the landmarks: 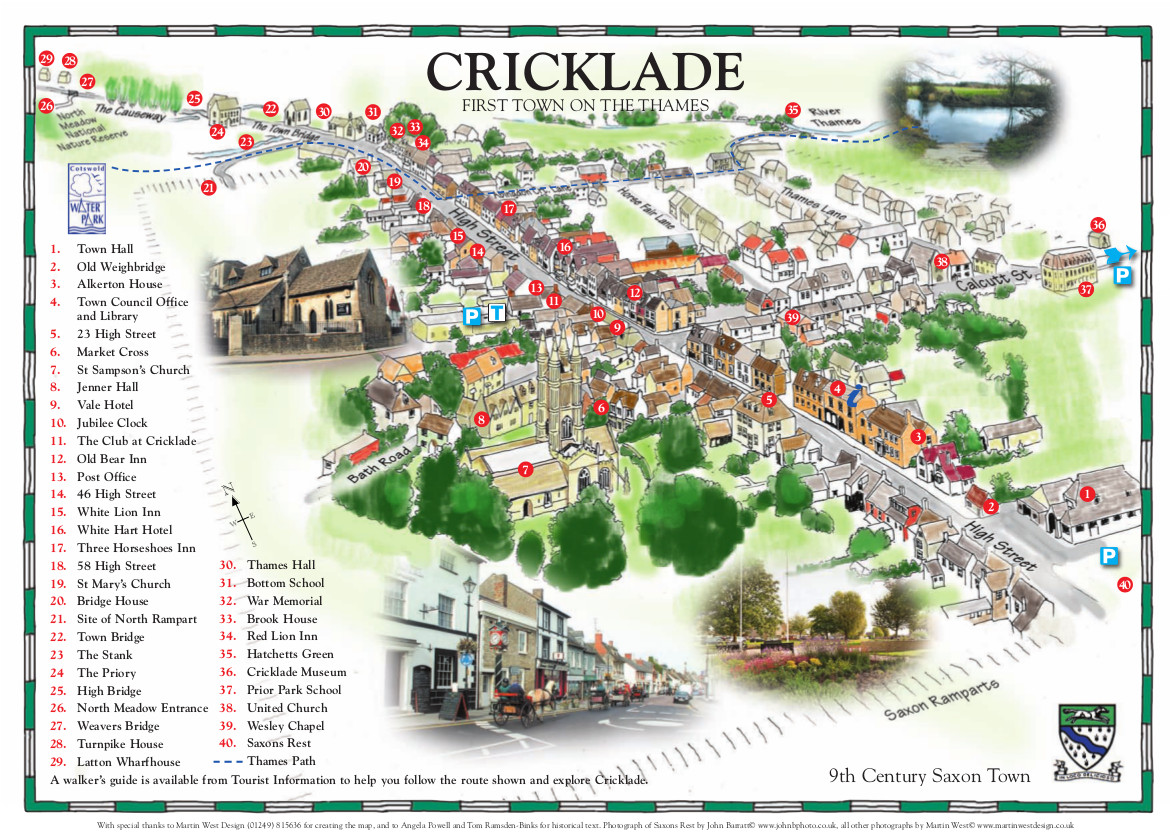 Although there is little extant Saxon work to be seen, remains of the rectangular ramparts can still be traced.  The best place to view them is the hump on North Wall Lane, and at the opposite corner – near Waylands off the High Street – the rectangular shape of the foundations can clearly be detected.

This medieval church is, unusually for England, dedicated to the Catholic faith, the building having become surplus to Church of England needs in 1981.  It is partly Norman, but was much renovated in the 1860s.  An external staircase and a gallery in the nave were both demolished as were the old oak pews, although thankfully the fine Jacobean pulpit was retained. 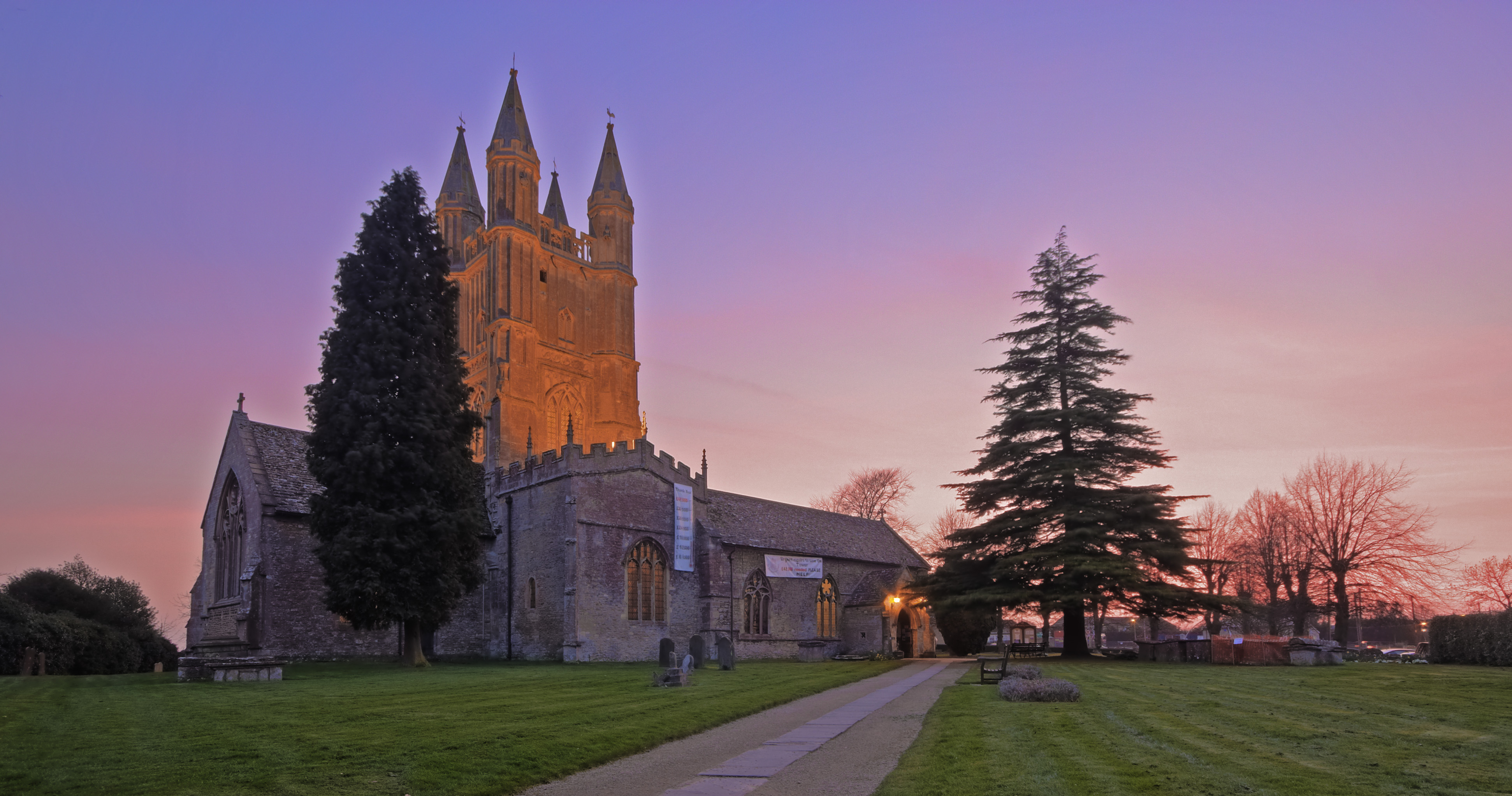 St Sampson is an ancient Celtic dedication and there is evidence of Saxon work in the present church, although the nave is predominantly 13th century.  The church tower, ‘the glory of north Wiltshire’, was rebuilt during the late 15th and early 16th centuries, by the Hungerford family of Down Ampney who once held the patronage of the church, and several local manors.  The interior of the tower lantern is decorated with carved bosses including several Hungerford coats of arms and other interesting insignia.  The mechanism of the former belfry clock, made in 1658 and still in working order, is in the south aisle.  A noteworthy tomb is that of Robert Jenner who paid for the school adjacent to the church yard.

The church was damaged by fire in 1823 but it was not until 1864 that it was subjected to Victorian improvements.  Three galleries were removed from the nave as were random shaped oak pews, some with upper floors and heated by stoves the smoke from which made it necessary to leave the church doors open.  Parts of the roof were remodelled and most of the south transept and south aisle walls were rebuilt.  A carved oak screen which enclosed the north aisle was removed.

The Congregationalists gained a licence from the Bishop of Salisbury, as was required in those days, to hold a church in Cricklade in 1772 and first met in a cottage on the High Street.  They built their new church on Calcutt Street in 1799, and built the church presently visible from the road in 1878 over the graveyard.  This was common practice among non-conformist congregations who often could not afford to buy more land or whose efforts to do so were made difficult by Anglican landowners.  The old building now houses the kitchen and schoolroom.  In 1969, the Methodists, who had occupied a chapel across the road, began to share the building (in 1972 the Congregational Church became part of the United Reform Church). 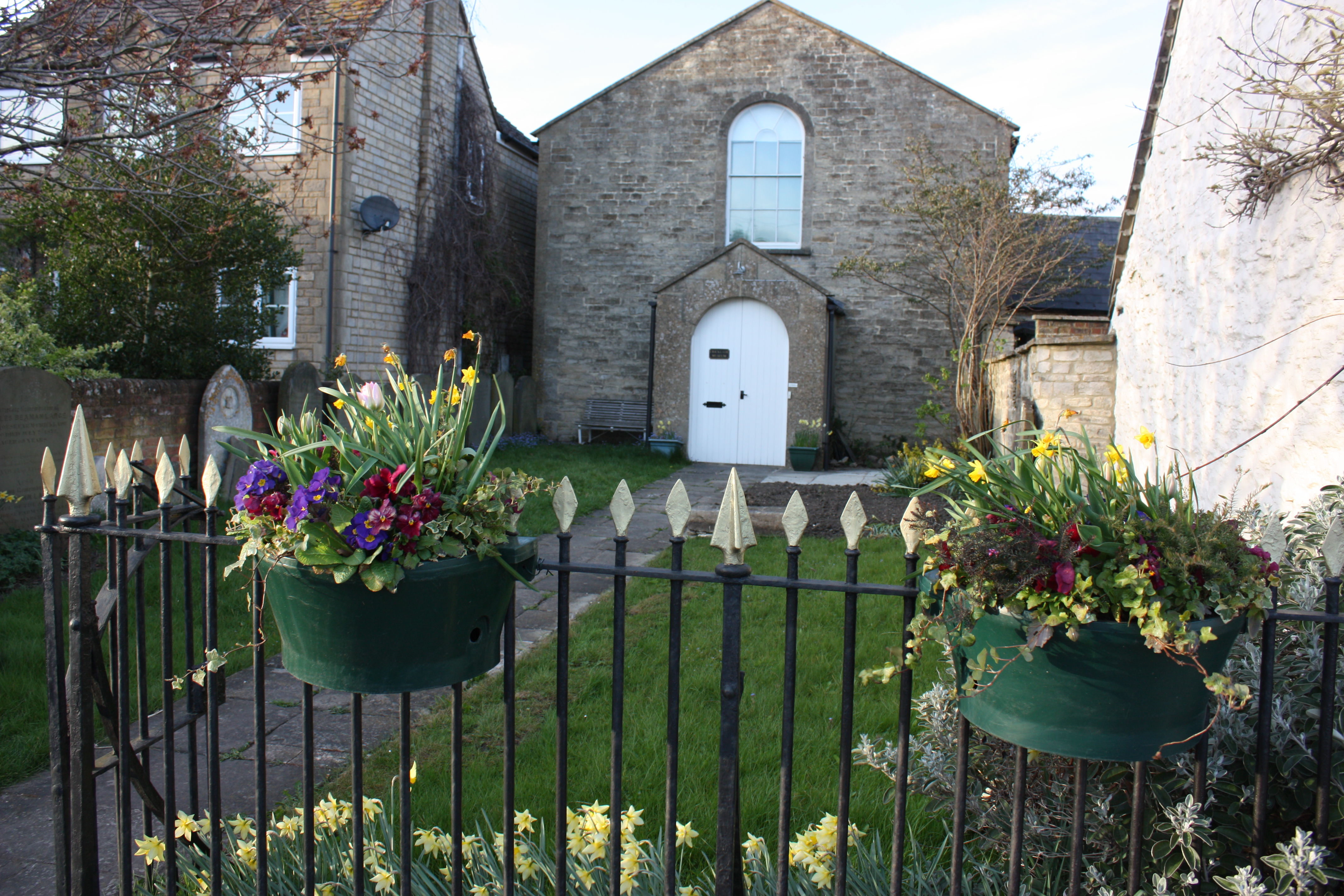 The Museum is housed in a former chapel erected in 1852 by the ‘Strict Baptists’.  Like three other former Victorian chapels in the town, it has since changed use owing to dwindling congregations.  During the Second World War, the building was used as a canteen and frequented by airmen from RAF Blakehill Farm and RAF Down Ampney.  From 1960 to 1984 the building was again a place of worship, this time for the Catholics.  The building was purchased by Cricklade Town Council in 1985 and leased to Cricklade Historical Society for use as a museum.  The Museum houses a collection of items relating to Cricklade from Roman to modern times including a large number of maps and photographs, other items range from woolly mammoth tusks to machinery used in the Ockwells Glove Factory.

Opening Times: May-September, Saturday mornings from 10am-noon and every 1st and 3rd Wednesday afternoon between 2pm-4pm.

Priory of St. John the Baptist

By 1231, the Priory of St. John the Baptist near the Town Bridge was a hospice for poor travellers.  The outline of its original east window can still be seen from the road.  The Priory did not survive the dissolution of the monasteries and has been in private ownership since 1550, a Georgian facade having been added.

Said to be on the site of a medieval hermitage, the main building was the largest house in the town.  Known early in the 19th century as ‘the Hermitage’, it was later extended.  It is now home to Cricklade Manor Prep.

Previously known as the Parish Hall, it backs on to St Sampson’s churchyard and was originally built as a school in 1652 by Robert Jenner, a City of London goldsmith and MP for Cricklade.  It later became the parish workhouse before being used as a school again until as recently as 1960. 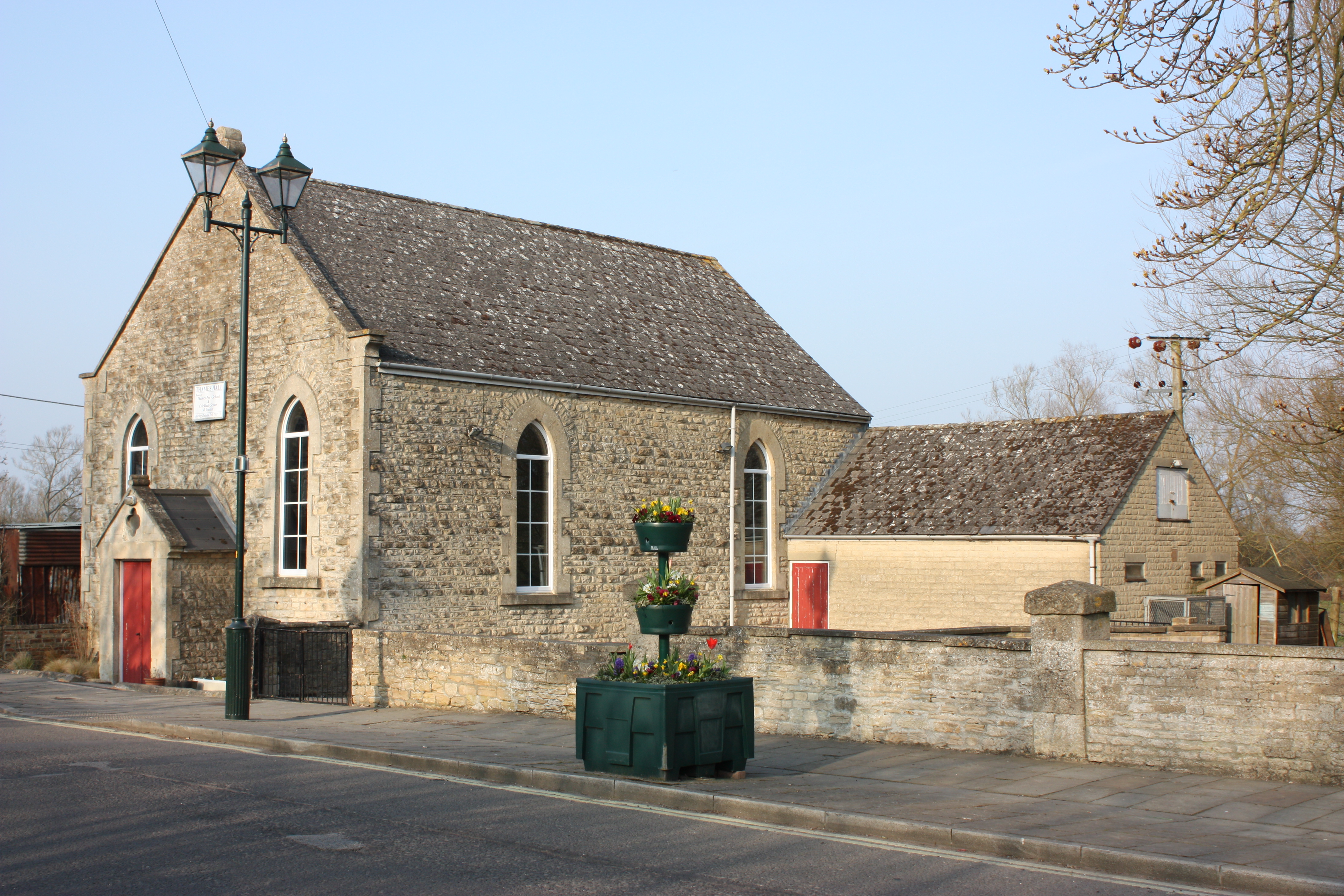 Built in 1870 as a Wesleyan Chapel is ceased to be used as a place of worship when the congregation amalgamated with the Primitive Methodists, who worshipped in Calcutt Street. It became known as the Priory Methodist hall and was used, amongst other things, as an overspill chassroom for the ‘bottom’ School on the other side of the River.

In 1964, the property was brought by the Trustees of the Cricklade Recreation Club to use for youth activities following the demolition of their hall next to the Town Hall (now replaced by the Annexe). In 2007, the Thames Hall was gifted to Cricklade Town Council by the Trustees and is still mainly used by the local Scout and Guide Groups.

This was built in 1933, in a style reminiscent of the architect Voysey and houses a replica of a 16th century Italian painting. The original was presented to the hall in 1945 and recognised only 50 years later as a valuable old master of the school of Carvaggio and sold at Sotheby’s in 1993 for £68,000.

The clock near the Vale Hotel on High Street was erected by public subscriptions in 1898 to commemorate Queen Victoria’s Diamond Jubilee in the preceding year.

The mosaic on Saxons Rest was laid to celebrate the Diamond Jubilee of Queen Elizabeth II which took place in 2012. It shows ‘Snakes Head’ fritillaries being pollinated by a bee and all surrounded by a ‘saxon’ border. It was designed and laid by local artists and craftsmen. 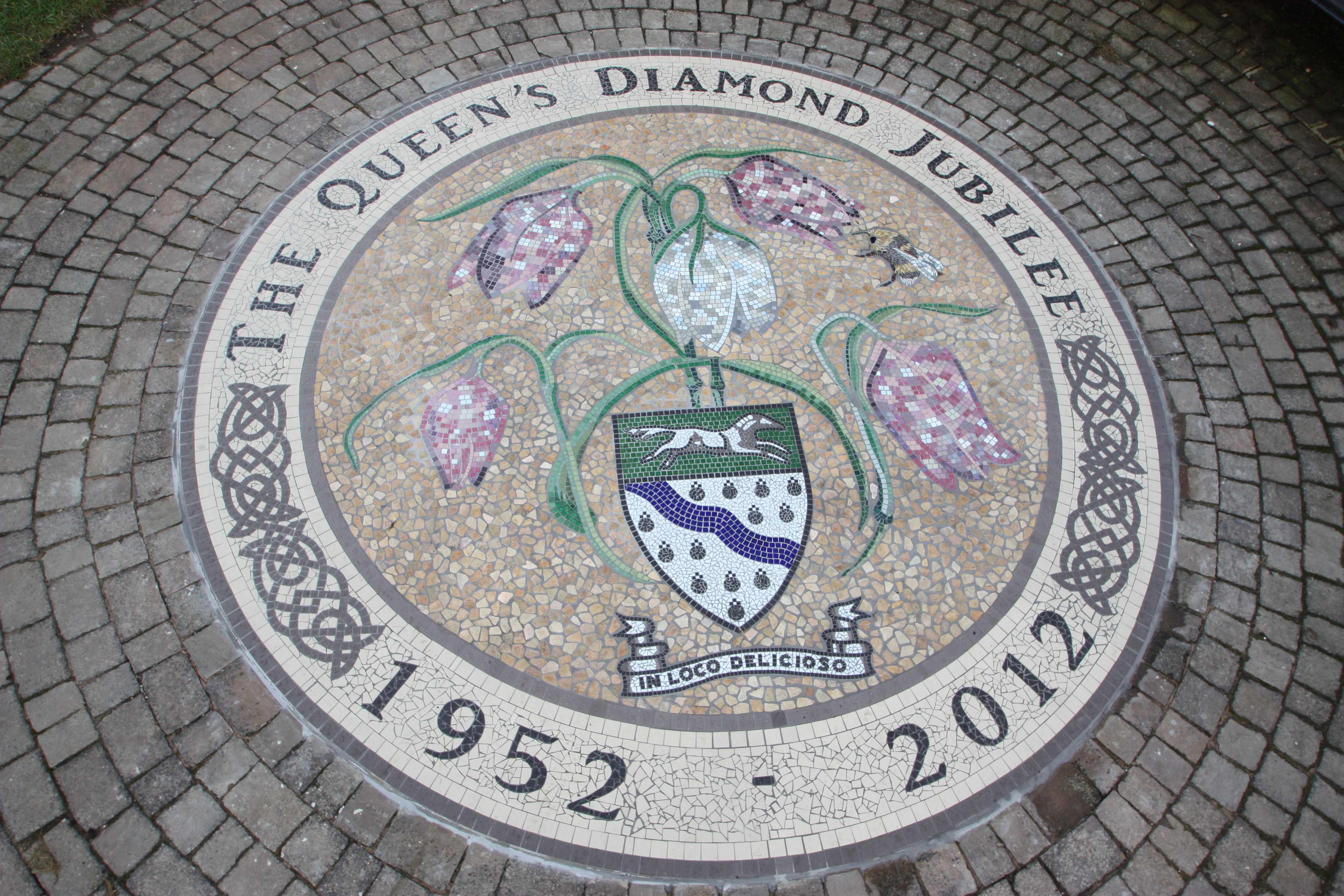 The Dedication of a New Memorial Cairn at the former Blakehill Farm Airfield took place on Sunday 25th April 2004 at 2.00pm at the cairn site in Braydon Lane, Chelworth.
It was erected to honour men and women of:
1) RAF 233 Squadron and the volunteer WAAF Air Ambulance Nurses serving with 46 Group, Transport Command and
2) Men of the Glider Pilot Regiment, who left from Blakehill Farm. They took part in the allied re-invasion of Europe on 5th/6th June 1944 (D -Day Normandy) and in the Battle of Arnhem in September of that year (often referred to as “A Bridge too Far”)..
Veterans of those campaigns have subscribed to the memorial to honour all who took part and to remember those who did not return.

The Rev Bob Boyce, Padre of the Glider Pilot Regiment conducted the service of dedication. He was assisted by Rev Stephen Oram, Vicar of Cricklade.

On this occasion the people of Cricklade were invited to join with the servicemen stationed among them in 1944 as they marked the 60th Anniversary of those events and the part Blakehill Farm played at this crucial stage of the Second World War.

The chosen inscriptions on the two memorial plaques are as follows:
“Dedicated to the memory of those men and women who served here with 233 Squadron R.A.F. in 1944 -1945. All played a vital role. Whether air-crew flying missions over Europe, ground staff supporting those missions, or the dedicated air ambulance nurses who flew with the casualties from the battlefields, they came from all over the Commonwealth and the British Isles to serve in the defeat of tyranny and the liberation of Europe.”

“To the memory of men of the Glider Pilot Regiment who flew from this airfield taking their gliderborne comrades into action with the 6th Airborne Division on “D”- Day 6th June 1944 and with the First Airborne Division for the Battle of Arnhem in September of that year, many of whom failed to return.”